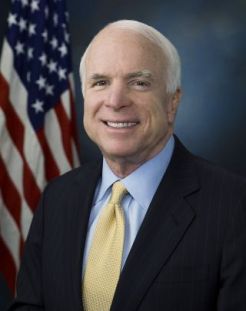 I know that the world is complicated, Mr. McCain, and I know that the rest of the world has benefited immensely from American largesse.  And, yes, I know that your generation is deeply invested in the post-war American global legacy – small wonder why you would interpret the anger expressed last November as a harbinger of “half-baked, spurious nationalism.”

But we are 20-plus trillion dollars in debt. Our imperial burden is disproportionately imposed on the most immiserated segment of American society: the working class. And our government has come to resemble that of every other bloated, corrupt empire in world history – the very outcome our Founding Fathers took pains to avoid almost a quarter of a millennium ago.

Yet, there are disadvantages that come with being a global behemoth. A generation or so ago, I had the great privilege of reading most of the writings associated the noninterventionist Old Right. Virtually all of these Old Right sages offered trenchant observations of the  consequences that would follow from America’s spreading its tentacles throughout world as the self-anointed global hegemon.  Indeed, much of what they wrote proved to be prophetic. Many among the New Left dusted off those books and re-read them in the late 1960’s to marshal an effective critique of the American war in Vietnam.

None other than Dwight Eisenhower, one of the principal architects of American globalism, warned of the attendant risks associated with the military-industrial complex. The national security complex that has grown out of the Cold War strikes me as especially unnerving , especially now that there appears to be ample evidence that it increasingly is being used by the political class to monitor and even to silence U.S. citizens.  Equally alarming, this apparatus has apparently, if not inevitably, developed its own interests, some of which appear to run counter to traditional American views on the divisions and limitation of power.

Before I close, I’ll return briefly to Dwight Eisenhower. The second and last volume of his presidential memoirs deals with the wide range of international visits he undertook at the conclusion of his term. The turnout among common people in many of these post-colonial, developing countries was quite astonishing – a million, as I recall, during one visit. Even Eisenhower, an old hand at diplomacy, expressed surprise, if not astonishment, at the levels of enthusiasm he encountered. But should he have been surprised? At the time, America represented the most successful former colonial country in history. Even as the struggle with communism escalated, the United States still enjoyed a lingering reputation of a constitutional republic that not only was anti-colonial but also opposed to imperialism. Recall that our behind-the-scenes diplomatic efforts played a significant role in wrenching India free of the British Empire.

Yes, there have been positive achievements associated with Pax Americana – I’ll not deny that – but we have paid a price, – an egregiously heavy price. And considering that noninterventionism and anti-imperialism have been long and revered intellectual traditions, I do consider it a grave injustice that our political class express shock and outrage that millions of Americans are asking probing questions about the legacy of the American globalist undertaking.

I’m not so much affirming Trump as I am the anger and frustration of much of the American working class.  Many of the divisions in this country are inextricably bound up with how one defines nationhood. Many of our Founding Fathers viewed the American nation as an Enlightenment experiment, but all of them to a man conceived the United States as a republic focused first and foremost on its national and economic interests. That is the crux of the American Experiment, and working and middle-class Americans deserve more than its being whittled away through a series of executive orders and agreements carrying, in many cases, the force of treaties.

To express it another way, Mr. McCain, the vast majority of working-class and middle-class Americans still view the American Experiment within the traditional nation-state terms – as a commonwealth. Many of them are weary of being lectured as provincials and even crypto-racists for holding that the nation-state remains the greatest guarantor of their liberties and economic well-being.