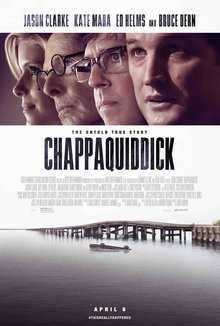 It’s long overdue.  The movie will only underscore why I and millions of other conservatives around the country harbor such as deep loathing for our liberal ruling class.

Think about this for a moment: Following the incident on the bridge, Paddy Caligula IV (following in the footsteps of Joe, Jack and Bob), “walked back to his motel, complained to the manager about a noisy party, took a shower, went to sleep, ordered newspapers when he woke up and spoke to a friend and two lawyers before finally calling the police.

As it turned out, Mary Jo Kopechne survived for hours due to an air pocked in the car and then presumably died of slow asphyxiation. If he had called for help immediately after the incident, she conceivably would still be alive today.

Yet, thanks to a combination of three things – Kennedy money, media complicity and the herd mentality among the rank-and-file left – Lascivious Ted lived out his life as the apotheosis of American progressive liberalism. He was lionized not only as the heir of Camelot but even posed a serious intra-party challenge to incumbent President Jimmy Carter in 1980.

Yes, his sexual predation apparently rivaled that of the notorious Harvey Weinstein, who inspired the #MeToo movement.  In fact, Kennedy’s lechery even exceeded his older siblings and his father, which is saying a lot.

And yet, the enlightened progressive voters of the Bay State overlooked all of this time and again.  A time or two in my life, I’ve been subjected to ribbing for coming from a state that idolized the likes of George Wallace and that even carried this adulation over to his ill-fated wife, Lurleen. Yet, it seems to have paled in comparison to the Kennedy cult of Massachusetts.

To be sure, there are certainly some very bad apples in conservative/Republican ranks, but I really would contend that they simply can’t get away with as much.

Honestly, if Ronald Reagan or one of the Bush siblings had run a woman off a bridge and waited hours to inform police, they not only would have been indicted but also would have faced utterly derailed political careers.

They would not be lionized to the ends of their lives as paragons of conservative virtue.

Under the circumstances, isn’t it just a little easier to grasp the rage that Richard Nixon, American political history’s classic underdog, felt for the Kennedy siblings – all of whom essentially were entitled, spoiled brats who carried on the philandering, exploitative lifestyle of their father, Bootleggin’ Joe?