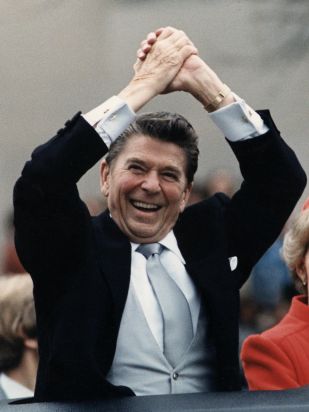 Why should we find it at all surprising?

George W. Bush, our 43rd president, once written off by the pundits and comedic agit/prop of the ruling class as the biggest presidential cipher since Warren Gamaliel Harding, is now portrayed as a thoughtful former president and statesman, one whose ruminations even should be taken seriously.

Yes, folks, in less than a generation, George W. Bush, once excoriated as the greatest menace to liberty and decency since, well, Ronald Reagan a generation earlier, has finally undergone rehabilitation.

But, again, why should we be surprised?

The current occupant of the White House, Donald J. Trump – Potus45, as he’s known in Twitter parlance – has been characterized as the greatest presidential menace since, well, Potus 43, George W. Bush.  So, the Establishment media, in true Soviet-style, had deemed it appropriate to upstage Trump with Bush, much as Dubyah was upstaged by Reagan, whom the media once excoriated as history’s most conspicuous presidential empty shirt.

Indeed, almost two generations ago, Ronald Reagan, now regarded as one of the most successful presidents of the 20th century, sat approximately where Donald J. Trump does today.  He was characterized as an entirely new presidential phenomenon, one lacking intellectual heft – half-educated, a bit gauche and provincial –  not only intellectually limited but a dire threat to the safety of planet Earth.   In fact, some media pundits characterized the former actor as the greatest existential threat to the planet since his intellectual godfather, Goldwater, the 1964 GOP nominee, who incidentally, was also dismissed as a reactionary chowderhead.

And I  still recall the large collection of Reaganite malapropisms the Establishment media compiled to support all these characterizations.

Today, though, Ronald Reagan is lionized by the Establishment media as the embodiment of Republican presidential statesmanship – a man who “grew” into the job.

Also telling to me is how media pundits resort to speculating about the I.Q. differences between Republican and Democratic presidents, especially during presidential campaigns.

In fact, have you ever noticed how the left, a political tradition supposedly wedded to egalitarianism, almost seems obsessed with the subject of a I.Q.’s and scholastic attainment, especially in terms of how this relates to Republicans presidents?

A few yeas ago, the media reported extensively on a study compiled by University of California-Davis professor that projects the I.Q.’s of every U.S. president since Washington.  The study ranked John F. Kennedy, with a projected I.Q. of 158, as the third most intellectually gifted chief executive, just behind Thomas Jefferson.  Bill Clinton, with a projected I.Q. of 156, came in fourth.

That is an interesting assessment, considering that Kennedy tested out with a bright but far from singular I.Q. of 117 at Choate Academy, his secondary school.  By contrast, Richard Nixon, his GOP opponent in the 1960 presidential election, scored a genius-level I.Q. of 143 while a student at Whittier High School.

Interestingly,  perhaps tellingly, Nixon does not rank among  the 15 smartest U.S. president in this survey, nor does any other 20th century Republican president, with the exception of the GOP maverick Theodore Roosevelt.  However, five Democratic presidents do: Kennedy, Clinton, Carter, Wilson and Franklin Roosevelt.

Yet, one can make the strong case that the 20th century produced some unusually cognitively gifted Republican presidents.

Herbert Hoover was a Stanford graduate who became conversant, if not fluent, in Mandarin while he lived in China. He was considered the Bill Gates and Elon Musk of his generation – the greatest logistical planner in the world, though his personality was, to be sure, somewhat mordant and colorless, which proved the kiss of death to his presidential fortunes.

Dwight Eisenhower not only ranked first in his class in the Army’s Command and General Staff College but also attained the Army’s equivalent of the doctorate upon completing the War College. Moreover, he oversaw  the planning and execution of the most complicated military alliance in history – not to mention, the most logistically complex land invasion in history.  As President, Ike undertook a thorough modernization of the White House national security structure. He is now increasing ranked by scholars as a great or near-great president.

And I would be remiss if I did not return briefly to our 37th president, Richard Nixon, who not only tested with a genius-level I.Q. at Whittier High School but also was admitted to Harvard, though he was unable to raise the money to support himself.  He excelled at Whittier College and later graduated from Duke University Law School on a full scholarship. Among other achievements, he significantly altered the geopolitical balance of power through his brilliantly conceived and executed China strategy.

It’s also worth pointing out that George H.W. Bush, frequently depicted by the media during his presidency as an airhead and an egregious violator of English syntax, was a Phi Beta Kappa economics graduate of Yale University and also served in the cognitively demanding role of director of the Central Intelligence Agency, not only overseeing intelligence efforts over a global scale but also managing employees who had taken a demanding cognitive exam to serve in the agency.

Sorry for this long history lesson.  But I do think it’s an instructive and enlightening way of illustrating how the Establishment media are constantly engaged in cultural warfare, even if this involves departing occasionally from egalitarian orthodoxy to call the cognitive capacity of conservative presidents into question or to alter history by elevating previously discredited Republican presidents at the expense of others, typically the sitting one.