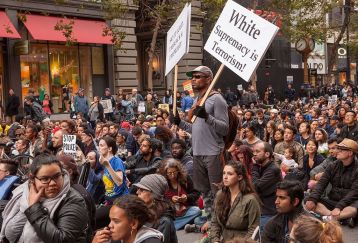 I have consumed a lot of  blog space lately discussing the horrifying totalitarian undertones of identitarian politics.  And I’m surprised by the increasing number of left-of-center news outlets that have been cornered into confronting the implications of this ideology.

One of the more prominent ones, The Guardian, recently served up a reasonably balanced exploration of this topic.

What many ordinary Americans simply do NOT get  – yet, at least – is that the expansion of identity politics virtually assures the end of the civil society that has held this uniquely American experiment in self-government together for roughly the last quarter millennium. (Read Alexis de Tocqueville’s “Democracy in America” for more details.)

The left has predictably hoisted itself on its own petard. It’s one thing to talk about equality under the law – to express a wish to be assimilated into the broader American matrix, which was Martin Luther King’s officially expressed view. But when exclusivist rhetoric, reflected in the demonization of other groups as a means of refining and enhancing identity, becomes the quasi-official policy of a major political party and the orthodoxy of the predominant culture – well, you can rest virtually assured that things are going to take a very ugly turn.

We are approaching a point similar to the post-WWI abandonment of the Hapsburg monarchy, the symbolic adhesive that kept sundry tribes at peace among each other within the bounds of the old Austro-Hungarian Empire.  And this has brought us to a crossroads.  We either undertake a systemic reform of the American federal system to reflect the new realities in this country – namely, the deep cultural, political and ethnic divisions that threaten to sunder us apart – or we prepare ourselves for a new centralized and increasingly authoritarian order aimed a keeping these highly fissiparous tendencies in check.

Yet, as history has demonstrated time and again, the second option ultimately runs against the grain of human nature.  It will only engender more tribal animosities, which will spark calls on the left for more educational efforts, coupled with more subdued (or, as the case may be in the future, overt) forms of authoritarianism to redress these increasing divisions.

Reflecting on all of this, I recall an observation posited some 35 years ago by one of my graduate school professors, a self-described Marxisant.  As he observed, federal policymakers and jurists in the mid-1960’s operated on the premise that while they could never alter the hearts and minds of racists, they could legislate changes in overt behavior.

We seem to have moved a long way past this.  Our ruling class seems to think with with a doubling down of cultural warfare and federal policy we can still finesse this – we can still make it work.  Even in the face of rankly exclusivist ideology, we can somehow still manage to inculcate future generations of Americans, particularly whites, with new hearts and minds.

We’ve been down this road before.  We appear to be confronted with a zealotry that bears more than a passing resemblance to the one that gave rise to efforts toward building Home Sovieticus.

In the end, though, this whole project is inimical to human freedom, at least, as freedom historically has been understood within the Anglo-American context. And it runs against the very grain of human nature.  And one must remember that rank-and-file Soviet citizens came to regard efforts to build new Soviet man with profound cynicism and contempt.  Sooner or later, likely sooner, will prove to the the case here in America, too – of that I have no doubt.