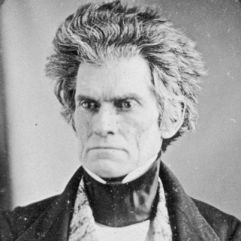 It’s often said that politics produces strange bedfellows.  And it appears that two weeks after the election of Donald Trump, a growing number of left-leaning blue-staters are embracing, however unwittingly, the political legacy of one of one of red state America’s most incendiary firebrands.

For 180 or so years, elites in the blue states – or what became blue states – have been wagging their fingers at Southerners and other red state Americans, decrying our appalling lack of patriotism and commitment to national unity and, even worse, our recalcitrance in the face of federal power and all that is deemed good, noble and decent in nation and the world. And, rest assured, if, after a year or so following a Hillary victory these fissiparous tendencies had surfaced once again in the South or any of the red states, the outcry would have been unremittingly harsh, with the left screaming about the dangerous rise of secessionist sentiment and the ugly racist, reactionary, conspiratorial and paramilitary-related impulses driving all of it.

Now that the proverbial shoe is on the other foot – now that red state rather than blue state America is in a position to tighten the federal screws – a growing number of Californians and other coastal blue states almost seem disposed toward the ideology of one of the greatest red state recalcitrants of them all: John C. Calhoun, the South Carolina firebrand who helped refine the nullification doctrine and even drew his native state and much of the rest of the South to the precipice of secession in the 1830’s.  And this embrace is occurring with hardly the batting of an eye.

And make no mistake: The people calling for secession or, at the very least, genuine devolution, are not simply ordinary people but also businessmen with real influence. One prominent Silicon Valley investor, Shervin Pishevar, walked back his earlier assertions of California secession, though affirming “a new Federalism where state and local governments are empowered to determine their destinies while bonded together in a United States of America.”

Think about this for a moment. A red state billionaire or political leader wouldn’t have conceived of raising such views following a Hillary victory without the inevitable verbal upbraiding by elites and the mainstream media. Yet, in the weeks following Trump’s unexpected victory, these sentiments are being espoused by the very people who otherwise would have regarded such opinions as dangerous, divisive, if not traitorous, talk only a short time ago.

But there is a silver lining to all of this rising fissiparous blue-state sentiment: It will likely pave the way for some genuine attempts at returning power to states and localities. States were envisioned by the Founding Fathers as entities with the attributes of nationhood but that were compelled, out of necessity, to pool a share of their sovereignty, namely, defense, foreign policy and economic policy,  to a general government – an approach considered far more efficient than each of these states exercising this sovereignty separately.

Honestly, despite all the hypocrisy that newfound blue state affinity for states rights and localism conveys, I wish California lots of luck.  I’ve got no problem with the idea of blue state America preempting Calhoun.  California and the other blue coastal states have every right to reacquire the accoutrements of nationhood that once characterized all of the states of the American Union.

I just hope that these states understand that red states are as much entitled to these attributes of nationhood as they are.