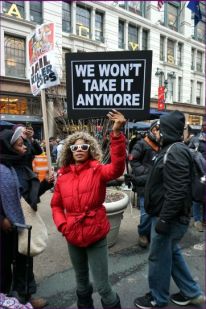 I’ve speculated more than once on this forum that at least part of the interminable anger and chest beating among Hillary supporters in the election’s aftermath stems from the realization that they were so close to closing the ring on  all of us dumb, reactionary red-state yokels.

The cultural war had ended, our national overlords assured us. History would remember Hillary’s resounding  victory as a confirmation of that fact.  All of us Deplorables would finally be brought to heel.  Figuratively speaking, the dog collars would be attached and all of us would be marched down from the mountains onto the broad, enlightened urban coastal plains.

Of course, an unexpected thing happened on the way to oblivion:  Trump’s remarkable electoral upset.

Some cultural skirmishing apparently remains.  A few pundits even speculate that the Trump upset could mark a turning away and perhaps even an abandonment of the culture war.  Some think that Trump may turn out to be a political realist, concluding that it’s time to put an end to all this disharmony.

Perhaps Trump may even end up affirming an insight that our Founders conceived almost a quarter millennium ago: namely that we are simply too diverse a nation for a culture war to have been started in the first place. Cultural issues are best resolved at the state and local levels. Perhaps he will even conclude that we are all better governed by 50 different social policies rather than by a cookie-cutter policy imposed from Washington.

Simply put, maybe the end of the Culture War will require a looser American Union.

Granted, ending the culture war will not make all Americans happy, particularly those among our ruling class who are deeply invested either professionally or financially in this protracted struggle. It will not be an attractive option at all for many deep-dyed blue Americans who live in red states and, conversely, for ruby-red Americans who live in blue states. Moreover, returning genuine sovereignty to the states ultimately  may lead to a much looser federal union – perhaps even one from which New York, New England and “Cascadian” America may leave to federate (or, at least, work out forms of post-sovereignty arrangements) with parts of Canada.

As I said, none of these options come anywhere close to a panacea.  But maybe Americans in time may conclude that to live and let live is preferable to a country in which tens of millions of Americans are, rhetorically, at least, at each other’s throats.